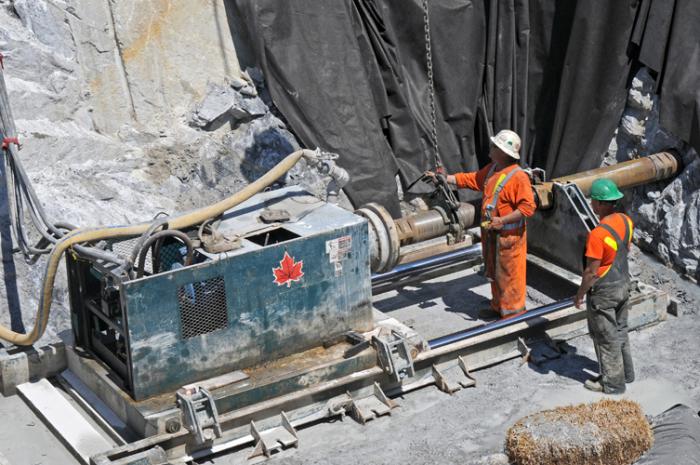 If the answer to these questions is yes, then a career as a Driller/Blaster could be right for you.

Drillers and blasters work closely together, and often perform both drilling and blasting activities. Drillers operate mobile drilling machines to bore holes in open-pit mines and quarries, and to bore holes for blasting and for building foundations at construction sites. Blasters fill blast holes with explosives and detonate explosives to dislodge coal, ore and rock or to demolish structures.

Drillers and blasters are employed by mining, quarrying and construction companies and by drilling and blasting contractors.

As a Driller, your duties may include some or all of the following:

As a Blaster, your duties may include the following:

There is no standard work week for drillers and blasters. Their hours of work may vary because some jobs must continue non-stop until completed.

Drillers and blasters work outdoors and usually travel to various work sites. They often work closely with other crew members to coordinate responsibilities and communicate progress.

The work is challenging – it can be strenuous and noisy. It also requires a lot of focus because you must gauge and control the drilling process.

As with all careers in the construction industry, safety is the top priority. Drillers and blasters are trained to work safely and wear special equipment to protect against injury.

Certification is not required, but it is recommended and is available in most provinces and territories. Certification tells employers and other workers that you are a skilled professional. It also helps you get jobs.

In addition to certification, a provincial blasting licence is usually required.

To keep their skills current, drillers and blasters must to keep up with new technology developments by reading and talking with others in their field.

The salary range listed here is based on national averages and includes all experience levels, from first-year apprentices through to highly experienced journeypersons. Wages can vary depending on the contract, company, location and collective agreements (if applicable), as well as local and national economic conditions. Overtime is not included.
$69,000

Job prospects over the next 10 years