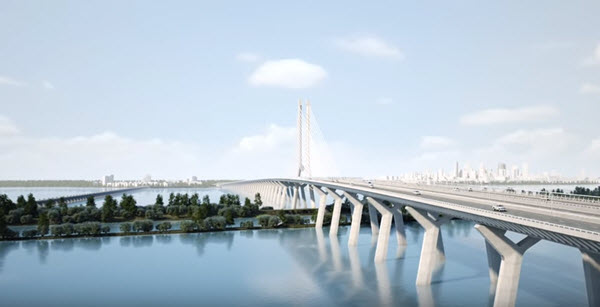 Design rendering of the new Champlain Bridge
(Image captured from the video below, “Design unveiled for new bridge”)

IMAGINE WORKING ON A PROJECT DESTINED TO BE A MAJOR CITY’S NEXT GREAT LANDMARK!

The new $4 billion Champlain bridge stretches across the St. Lawrence River from Montreal to the South Shore in Brossard and is one of the largest infrastructure projects in North America.

The old bridge, named after Samuel de Champlain, the “Father of New France", was Canada’s busiest, with nearly 60 million vehicles crossing its expanse every year. Opened in 1962, however, it is now more than 50 years old and needed to be replaced. The new bridge is being built to last at least 125 years.

Stretching 3.4 kilometres, the new Champlain Bridge, is designed as a cable-stayed structure, meaning that the bridge deck is supported by cables from towers (or pylons), requiring a huge amount of steel – in this case, about 250 cubic metres of it. Seventy-four underwater footings, each measuring 11 metres wide by 11 metres long by 2 metres thick, form the base of the bridge, which was constructed using a modular approach, with a mix of pre-fabricated concrete pieces and pre-assembled steel installed one piece at a time.

Replacing Canada’s busiest bridge was no easy task. Before construction of the actual bridge could even begin, three temporary jetty’s (see video) had to be constructed as work platforms, using a total of 1 million tons of stone. Then there’s “Thor the ant,” a super transporter that was specially built to move 38 of the 650-tonne concrete footings onto massive catamarans from which they were lowered into their foundations at the bottom of the river.

In December 2015, the first major milestone was achieved when 605 tonnes of concrete were poured for the first permanent piece of the structure – the first footing (see video) to support the pier legs of the bridge.

The bridge was opened to traffic in June 2019.

“My father always told me when I was a labourer to keep my head up, pay attention and find a trade that I was interested in. It just so happened, that running equipment was what interested me the most.”
Tim Chandler
Heavy Equipment Operator